Although SDI-12 is a cryptic hardware and software protocol, it is still a widely used standard interface between environmental sensors and data loggers. Until now, sensor vendors have had the difficult and costly burden of creating their own SDI-12 solutions from scratch. Because of the many eccentricities of the SDI-12 protocol, it is a difficult task to create a truly compliant SDI-12 sensor interface.

The SDI-12 to Sensor Solution

Because of its small size the sensor can often be incorporated into the sensor housing. Alternatively it can be used externally. For sufficiently large quantities, we can provide custom board shapes to fit most any form factor.

The translator uses a highly accurate 24 bit analog to digital converter to convert analog data from the 4 channels to digital values.

Many analog sensors have current loop outputs, which have the advantage of being loop powered, and do not suffer signal degradation with long cable runs. The SDI-12 Analog Sensor Translator is normally configured with voltage reading inputs, however, it can be customized to read current output sensors, by changing the input resistor network on the boards. We have instructions below on how to do this, or we can do it for you here at our factory. Just contact us before placing your order to let us know, that you would like this customization option.

The Translator is extremely low power with only a 76uA current drain when it is sleeping, and it provides sensor power control, so that the sensor only receives power during a measurement cycle. This is useful for creating battery powered sensors.

An LED indicator makes initial system configuration and debug easy. The LED will light whenever it receives an SDI-12 command. The LED can be enabled or disabled with an extended SDI-12 X command.

All standard SDI-12 commands are supported. In addition, it has extended commands which can be used to calibrate sensor outputs.

Our Translator has been fully tested with the NR Systems SDI-12 Verifier.

Each of the measurements from the 4 input channels can be scaled and offset with user supplied calibration coefficients. This allows you to automatically convert the data, from a voltage into meaningful units.

In addition to all these features the SDI-12 Sensor Translator has an on board temperature sensor, that you can calibrate to your application.

We carry other useful SDI-12 protocol products that make it easy to get up and running with SDI-12.

We also carry an USB to SDI-12 translator which may be of interest to you. This will turn any computer with a USB port into a SDI-12 compatible data logger.

If you're new to SDI-12, and want a simple, easy to learn, evaluation system to speed up your learning SDI-12, we recommend getting both an SDI-12 Sensor Translator, and an SDI-12 USB translator which can talk to each other.

We also still carry the previous generation legacy 16-bit, 3 channel SDI-12 analog sensor translator. This board costs less, but is larger, only uses 16 bit sampling, has one less channel, higher power, and has a single power output to all of the sensors.

To keep the cost low, we sell the board by itself, or you can optionally pair it with an enclosure. The enclosure is made of 3D printed PLA. The top part is of the case is transparent, enabling you to see the internal LED. The bottom part has flanges with mounting holes, making it easy to mount.

You can purchase the case from us for minimal cost, or 3D print your own enclosure, by downloading the SDI-TRANS-SNS24-CASE STL files and printing the case yourself.

We take a modular approach with our product lines. Each product is simple and low cost, and will easily interface to all of our other products. This approach allows you to build any type of application from our basic set of components.

We Want you to be Happy

Ordering is easy and low risk. Since we build our own products at our factory, all of our products are in stock. When you place your order from our website, it will ship same day from our factory, and you'll have it in your hands in just a couple of days. We ship to nearly EVERY COUNTRY in the world.

If you aren't amazed and delighted by your new SDI-12 Analog Sensor Translator, return it for a refund within 30 days. 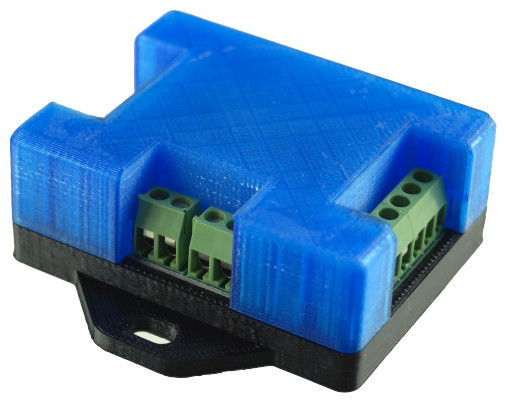 SDI-12 to USB Translator with Case. (Case is sold separately)

We ship to nearly EVERY COUNTRY on the planet, directly to you from our factory.

Other Vegetronix Products of Interest

For a good background on the SDI-12 protocol see www.sdi-12.org.

The commands assume that the sensor address is 0, but any address could be substituted into the commands below. "\r\n" is carriage return and line feed characters.

Calibration coefficients are modified by extended "X" commands, and are indexed by a 2 dimensional array, where the first zero based index is the measurement index, and the second is the parameter.

Each measurement has 3 parameters:

If you would like to calibrate the output of the second sensor such that it's voltage is multiplied by 2 and an offset of 3 is added to the result:

you would use the following two extended commands:

Each sensor input has a resistor divider circuit which can be used to divide the input voltage from a sensor. The maximum input voltage to the ADC is 600mV, so sensor output voltages must be scaled to this result. See the "Input Configuration" section below.

The Vegetronix THERM200 can be easily converted into a fully compliant SDI-12 sensor, returning temperature in degrees Celsius or Fahrenheit by configuring the translator with the appropriate coefficients.

For Celsius for channel 0 send these commands:

To verify that you've set the coefficents correctly use this sequence of commands:

Sensors can be connected to the translator through a terminal block. Sensors can be differential, or single ended, depending how the input resistors are configured. The maximum input voltage to the 24-bit delta sigma converter must be below 0.6V, and so a resister divider network must be used to divide down the voltage input, if the sensor voltage is greater than 0.6V.

For single ended and differential mode, we use the internal parallel input resistance of the ADC to form a voltage divider to ensure that the input voltage is below 0.6V. The boards are normally shipped with with the single ended configuration. The 1 MΩ series resistor forms a voltage divider with the inherent 200K input resistance of the ADC, creating approximately a 1/6 voltage divider. For example if you apply 3V to the input terminal of the translator, you will measure approximately 0.5V after the 1 mega ohm series resistor. In this case, the translator should be calibrated with resistor gain of approximately 6.

The 200K input resistance is an approximate value and can vary from device to device, and so to get exact results each channel must be calibrated. If you order standard single input boards with 1 MΩ series input resistors, we factory calibrate each channel for you. If you make changes to the resistor network, then you will need to calibrate the boards yourself.

To compute the exact resistor gain value for each channel, measure the input voltage and the voltage after the series input resistor. Divide the two measurements to get the gain value. Use the extended commands to update the resistor gain value. Test your calibration by sending a measurement command to the translator. The response values should match the measured value on each input channel.

Suppose you want to recalibrate channel 0 which has a 1 MΩ series input resistor and you have applied exactly 3.00V to the input. The first step is to set the resistor gain coefficent to 1:

Then find out the voltage on that channel by taking a measurement command, followed by a data command.

You can see from the measurement that the value for that channel is 0.512V. The resistor gain calibration coefficient is 3.00V/0.512= 5.859. You would send the following SDI-12 transparent command to update the resistor gain value for channel 0.

You can verify that you've set the right gain value, by running the measurement and data commands again.

You should now see a repored value of 3.00V on channel 0.

Figures 2 and 3, show resistor divider networks for a differential and single ended systems, respectively. Single ended and differential sensors can be mixed on an SDI board. Just let us know which type and the voltage range, before you order.

The SDI-12 Translator can also be configured to turn any 0 to 20mA sensor into a fully SDI-12 compliant device. Figure 4 shows how to configure the input resistors. The calibration coefficients should be configured as follows so that the sensor returns it's measurements in milliamps:

You would send the following transparent commands to the Translator to calibrate it, if the current sensor was on channel 0.

Retrieve and write down the factory calibrated resistor gain coefficient, in case you want to change change the channel back to a voltage input. Otherwise, you wont be able to go backwards.

Then set the resistor gain coefficient to 1.0 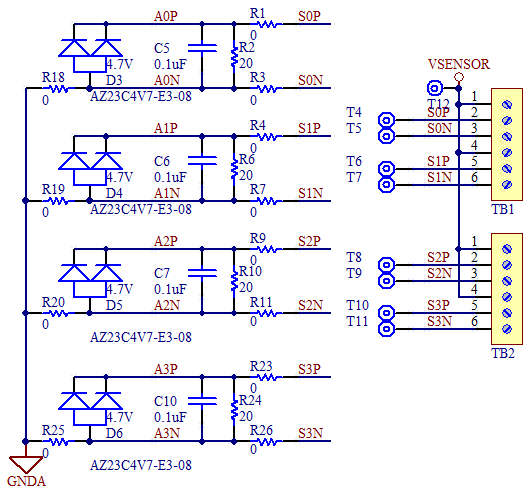 The SDI Sensor Translator has an internal temperature sensor that gives an approximate temperature, however for higher accuracy it must be calibrated by the end user. If you need a better temp sensor use our THERM200 sensor on one of the channels.

The default coefficients can be reset as follows:

The resistor gain coefficient [4,2] is ignored. 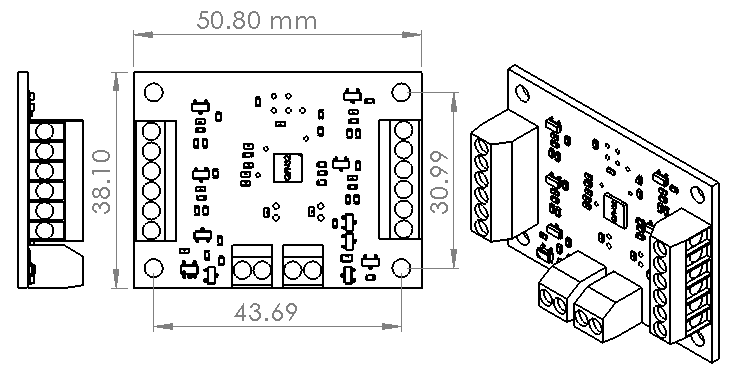 How to Get Started with the SDI-12 Sensor Translator